Emily Zoss is the managing editor of The Educational Forum, published by Kappa Delta Pi. 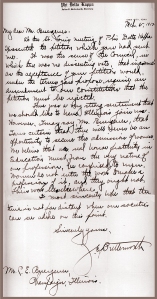 Letter from PDK to KDP on the rejection of the merger petition, March 5, 1912.

International Women’s Day is on March 8. The fact that it overlaps with the anniversary of Kappa Delta Pi’s founding is a lovely coincidence, as women’s equality was a significant concern in the early days of the organization’s history.

During the period immediately before and after the establishment of Kappa Delta Pi (KDP) on the campus of the University of Illinois in 1911, members investigated affiliating with the fraternity that came to be known as Phi Delta Kappa (PDK). The two groups had similar aims and ideals, but with a major exception: KDP allowed women to join, and PDK did not.

A key turning point came in March 1912, when KDP’s final petition for a merger with PDK was roundly rejected. Displayed in the entry of our headquarters in Indianapolis is a letter that Julian Butterworth of PDK sent to Claude E. Burgener of KDP on the occasion. A memorable passage reads as follows:

There was a very strong sentiment that we should like to have Illinois [KDP] join us. However, I may say, Mr. Burgener, that I am certain that there will never be an opportunity to secure the admission of women. We believe that a real honor fraternity in Education must, from the very nature of our profession, be confined to men. Women do not enter the work to make a profession of it, and they ought not. Their work lies elsewhere.

I most sincerely hope that the time is not far distant when our societies can see alike on this point.

Although both groups today welcome a broad membership, we’re proud of our inclusive heritage.

There’s still work to be done on a host of other issues throughout the world related to gender equity, but on March 8, consider taking a moment to honor the commitment of KDP’s founders to women’s equality in the profession of education.

One thought on “International Women’s Day”